Sadly, after only two quick days we had to wave goodbye to the Tarsiers and continue on to Kristen’s grandparents house in Cagayan De Oro City. This is where most of Kristen’s Filipino relatives live.
This is the first week of Cagayan…

There seemed to be a family get together for one occasion or another every other day. This was somebody’s birthday but we are unsure who.

Kristen has so many relative it gets really hard to keep up with.

Fiesta in Cagayan. Another family shindig.

There is a pretty stark contrast between people with money and people with no money in the Philippines.

Kristen’s grand parents house was only a short walk from the beach so we spent a whole lot of time there. Swimming is always a nice option when you are on the equator, but I always missed good photos when I came to the beach to swim, so each day I had to weigh my options and decide if I wanted to swim or bring my gear.

Kristen was a good sport.

Another dilemma that I often faced was that the good light is in the evening, but shortly after or during… the gnarly storm comes almost every day. I shot this just before the first time we got stuck in a storm.

We took refuge under a little beach hut, but the rain was very hard and the hut was small and leaky. I shot a few photos and then covered my equipment. The locals are very casual about the storm and the kids play and clean themselves.

Chocolate hills. The legend behind the hills is that two giants got in a fight and thew rocks at each other and left the mess behind which became the Chocolate Hills.

There are about 1300 hills on Bohol. They are not found anywhere else in the world.

This basketball court was between our hotel and the Chocolate Hills. I walked up to the court and said to Kristen. “I wish there were kids playing here, it would be good to photo.” A moment later I noticed the kids hiding above the back board.

Bohol is also home to the largest snake in captivity. A 24ft Python.

I took a lot of photos of this drag queen performer who was putting on shows and helped take care of the python, but they are a part of a story I’m working on which I can’t show yet, so all you get is this tease.

There were lemurs there too, but between a 24ft Python and a drag queen lip sinking to America the Beautiful… they don’t get much attention.

Kristen brought along her 35mm camera and took pictures of me taking pictures.

Tarsiers are the worlds smallest primate and are found only a couple of places in the world. Bohol is one of them.

Here are a few of Kristen’s tarsier shots. 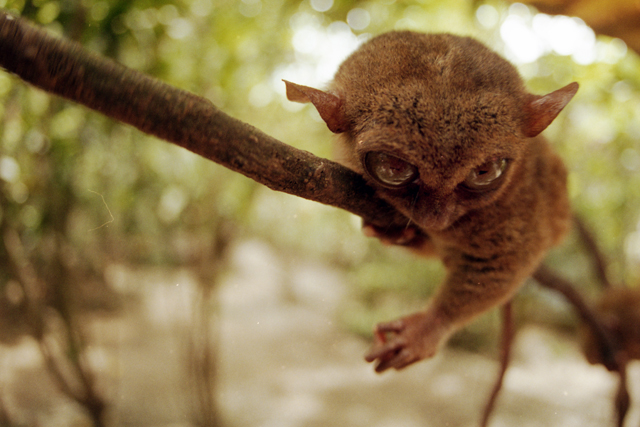 Okay so part of being a good photographer is about knowing how to edit down (less photos = more impact) That theory doesn’t apply to photos of tarsiers. We spent two days hanging out with these guys which was pretty much our whole time on the Island and we never got sick of looking at them and so I think it would be an injustice to you and the tarsiers if I only selected my two or three favorite tarsier shots. So here you go. The edit you deserve.