I gots a job too

I was inspired by Eric’s work blog, so I decided that I would allow you a look into the life of a Big Lots furniture salesman. I’m always all alone in the furniture dept and usually have nothing to do. So I keep myself busy however I can. This is how I spend my 6 hour shifts.

The best part of the job is getting to wear this badass smock. Since I work alone, to make this blog possible I had to master the art of self portraiteaure’ (that’s French for self portraits).

Furniture? we got it. We also probably have one hell of an electric bill.

With all this free time on my hands I figure why not spend it training my mind and body for combat? I train 45 minutes a day. So I’m a box cutter ninja… on the side.

30 minutes a day is designated as target practice. 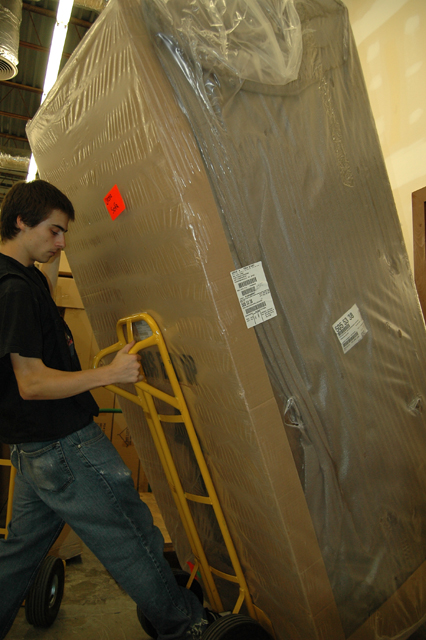 Every so often some ass hole will come into the store and totally interrupt me and I’ll actually have to do something. My strategy is to be extremely short with them. If I’m lucky they will get mad and leave. If that doesn’t work I try to talk them into getting as little stuff as possible. This way I don’t have to carry as much shit out the door. These “customers” usually take up about 30 minutes of my day.

But then it’s back to the warehouse for a one hour cartboard session. I’ve got kick turns and powerslides on lock, but I’m still working on shuv-it’s and kickflips.

The next 45 minutes are spent finding killer jumps. Some of them require a setup, but I found this gem as is (check out the impeccable self timering).

The jumping really takes it out of me. On a good day I can squeeze in a 2 hr nap. This is not a good time for a customer to ask for help. You wouldn’t like me when I’m awoken from my post killer jumping nap (see picture 3 of blog).

The last hour and a halfish is generally taken up by actual work. Mopping is lame. My job is lame. I know it looks like all fun and games, but it’s actually quite lame. Brunt used to work there with me. He can attest to it’s lameness. In fact I bet I can guess what his comment will be for this blog… 3 words.

These are just a few pictures that Kristen and I have taken lately.

He didn’t get a job because he looks too sneaky.

I took kristen out to teach her new camera tricks.

This is Kristen standing next to the world’s biggest horse. It’s 6ft 7in at the back.

This is Kristen’s brother Simon. Both of her brothers are hella ladies men. Photo:Kristen

We accidently made an up rail while I was trying this ollie. Photo: Brunt

I took sooooo many pictures durring coon dog day that it had to overflow into a second blog.

Back by popular demand…

The first blog I ever did on this site was from last years Coon Dog Day. For those of you who have not seen it… I live in a small town in North Carolina. Every July we have a grand festival in celebration of Coon Dogs.

This is a coon dog. They are a redneck’s best friend.

Their job is to chase the coon into the tree and bark at it until the redneck can shoot it out of the tree.

As ridiculous as it is, Coon Dog Day draws in thousands of people from all over. Some come to pay homage to these coon-chasing K9s, and others just come for the photo ops.

I was standing at the very end of the street so by the time the parade got to me everyone seemed to be pretty over it.

This guy has been training all year for this.

Don’t fuck with the clowns.

Very little of the parade has anything to do with coon dogs.

Apparently pink is in this year.

A good soldier never leaves a man behind.

There was a much better sign about eating coons, but I’m holding out for the EAT installment of broken branches.

Incase you are wondering, that IS exposed ball sack you’re looking at.

I bet if you threw that lady in the water she would swim. I should have been in Salem back in the day. I know a witch when I see one.

I move to elect a new queen

This could be my favorite picture I’ve ever taken. I was seriously intimidated by this kid, I felt like he could have just snapped his fingers and had me taken out.

This guy lives right down the street from me. I’ll be coming home at like 4 in the morning and he will be driving this thing in the middle of the road with no lights on heading for the gas station. I have almost hit him so many times. Kristen has nightmares about him.

Sometimes I have nightmares about this chick.

This is my brother Justin and his homie Nate. They are good peeps.

This is my lovely photo assistant. She was on hand and ready at all times with lenses etc. She also snapped a few pics herself. The following two pictures were taken by her.

I’m not sure why I ended up with so many pictures of kids… I guess they were just having more fun.

The shirt says it all.

Coon Dog day kinda makes you feel like this.

This is kind of a catch up blog. It spans a couple of weeks. Some of the events blogged may have already been covered by other bloggers, but this is my take on things.

First off I’m psyched because ITALIA took out Germany yesterday.

After the game we went to this spot that I never really get to skate cause It’s pretty far out, but it is probably my favorite spot in Western NC.

Meanwhile the rest of the gang was playing with their newly acquired Carrot top wig.

Brunt didn’t have any Germany geer to rep so he decided to hold it down for Bud instead.

Satan aka Ted was cheering me on.

After skating we met up with Hunt and went out to Triple falls which was the raddest waterfall I’ve ever been to. Aside from the hundreds of people that were there it was perfect. The water fall experience will be elaborated on in Brunt’s next blog. I didn’t bring my camera.
It started pouring down rain and hail while we were there so we had a long wet walk back to the car.

We stopped at this church to peep skate spots and change into dry cloths.

All of the spots at the church were good, but pretty gnarly so the session ended up being the grass hill.

Skip to nighttime in Asheville. 4th of July fireworks attract way to many people to down town. Snakes are the shit… Spiders can all die.

We all met back up at Vance to be patriotic.

While we were waiting…

Lot’s of winners down town.

Satan was praying for a disaster.

We left before the it was over so we could go back to Molnar’s and shoot off our own fireworks, but nobody made the trip to South Carolina to get the good stuff so this is about as epic as it got.

The following are just a few random photos that I’ve been sitting on for a minute.

White skirts are the best thing ever.

I probably should have submitted this one for creepy.

I walk around trying new camera trick all the time. This one still needs some work, but it has potential.

John at an art show a while back.

Lizards are the shit… All spiders can die!