As soon as I got to San Francisco, I left. Went to Mendocino County with old friends to stay in a couple of geodesic domes along a river. It was one of those weekends where everything else is on hold. Times like that are few and far between these days.

It started with shoplifting when she was 11 and sneaking out when she was 12. Then cigarettes, pot, pills and booze. My sister is eight years younger than me. I was already off to college when she was still in elementary school. I guess my influence didn’t stretch the 3000 miles that separated us. She grew into an enigma after I left. Despite good grades and a generally pleasant demeanor, the drinking tickets and deadbeat boyfriends piled up, she was fired from about every job she ever had, her purse or phone was stolen once a weekend, innumerable car accidents, more shoplifting, possession of marijuana, a broken jaw from a drunken brawl. The list goes on and those are only the things she’s been caught for. At least once a month, my mom would call me on the verge of tears to relay the latest disaster. It all culminated two days after being fired from her last job at Ruby Tuesdays and a week after outrunning a cop in her car. She, still just 18, and her friend ended up leaving a bar after last call, totally obliterated. She offered to let her friend drive her car. Minutes later then ended up crashing into a house, totaling the car. Everyone was physically fine, but that was the moment it all changed.

Before noon the following day, my mother and sister Nicole moved her out of her apartment in small-town North Carolina and put her on a Greyhound to New York City with two hastily packed suitcases. That was it. She had become too much of a liability, unable to support herself and unable to be supported by my mom. In all reality, she’s not the worst kid there ever was. Still the financial and emotional devastation were too much to bear. But before my mom could put her on the street, I suggested she go to Egypt to live with my father. The following photographs are from the week in New York before moving to Egypt, before life flipped upside down.

We finally talked about it that first night in Brooklyn. She was frustrated because she felt like she had no say in the situation despite being an adult. But she also couldn’t think of any alternatives. She confessed her problems and a desire to get better. But at what sacrifice?

After a day or so, she came to terms with her future. She’d go and live with our father in a small town in Egypt, where alcohol is virtually nonexistent by Muslim law. She doesn’t know any Arabic and wouldn’t be able to communicate with anyone but my father. But it would give her a chance to get to know our Dad who left when she was still young.

This was the first time she had ever come to visit me in New York. I tried to show her a good time knowing it might be her last for a while. I also suggested she watch “25th Hour” where Ed Norton ties up his loose ends in the days before a prison sentence–a dramatization of her situation of course 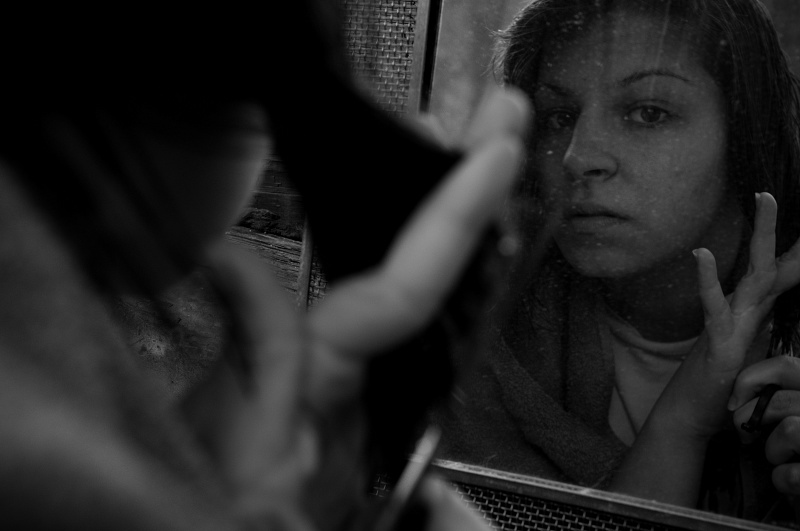 As a symbol of this next phase in her life, she decided to chop her hair off in my backyard. She used dull scissors to cut off six inches of old hair.

My father doesn’t have a phone in Egypt and only checks his email sometimes. I concocted the entire plan to send her to Egypt before I even heard back from him. Fortunately, he approved everything. He said he was excited to have her and asked could she bring four bottles of whiskey and a package of bacon with her.

We ordered her a rush passport and bought her a one-way ticket to Cairo. It took three days to make all the arrangements.

On the way to the airport, not knowing how long she’d be gone, out of tears and ready for something real, whatever that may be.

At the airport, she said she wasn’t scared. Some part of her was actually looking forward to it. What was she leaving behind really? Hardly any of her friends called to wish her goodbye. Maybe it really is for the best.

All of that was almost four months ago. I’m happy to report that she is doing really well in Egypt. She emails me almost everyday with well-written insights on life, Egypt, family and falafel. She’s finishing her associate’s degree online and teaching English at an elementary school across the street. Her best friend is a 7 year old girl that lives downstairs. Neither can speak the other’s language but they get along just fine and watch cartoons in Arabic. Her one American friend is an older man named Mr. Patrick that works at the school with her. He listens to all revelations that come with being 19 and in a strange place. My Dad treats her well and enjoys having her, but still likes to complain about having another mouth to feed. They got a puppy. She’s been proposed marriage twice, though she claims to be holding out for love. She wants to stay through the next school year to continue teaching. The following year, she’d like to return to the States and transfer to a university and meet some quality friends.

This is one of her photos from Egypt with a camera I gave her. I don’t mean to communicate that we hung her out to dry. It’s just my favorite one of the few that she’s sent. It shows me that she’s looking at things differently. She fucked up and for maybe the first time she’s really realized it. But now she’s making a big sacrifice to change. I have faith and love my little sister.

Some days when I didn’t care if I was robbed, I’d walk around the barrios with an old camera and hand-rolled blanco y negro in a plastic shopping bag.