from about a year ago.

thank you very much.

i found this thing yesterday, in a journal i never use, it was something i wrote after i got back from craig’s funeral last year. its the year anniversary today so i posted it, and some photos from that day.

I met up with Stein the other day at the base of the bridge on canal street. It was 6:25am when i got there, i was early. Went around the corner and bought a bagel and some juice, I’m trying to stay healthy during the temperature change. I made small talk with the cashier about the motorcycles parked outside, it seemed like he needed my company. It’s strange talking to people you know you’ll never see again. It’s rude to tell someone, “have a nice life”, but sometimes it does seem appropriate. I go back to meet stein and i remember thinking about the last time i had seen the sunrise….years. I had printed out our tickets for the fung-wah bus the night before just in case. The woman taking tickets was feeble like a toothpick mannequin, fridgid and short in her speech. I think that a lot of bilingual chinese to english speaking people don’t really think enough about the tone of the english language. I know that in chinese you sort of have to sing every word a certain way for it to be even understood. English is different because we understand the word, but take offense when its said a certain way. She tells us that i printed out the wrong receipt and that we didn’t have tickets, but then let us on anyhow.

The “fung-wah” takes you from NY to Boston for about $20 each way. At first Stein and I sat right next to each other and talked, but then the gentleman in front of us reclined his seat too far, forcing me over to the empty two seats across the isle. Then the sun rose. The bus ride felt more like a flight to me, everyone asleep next to their friends and family, baggage over head with a bathroom in the back. It was so quiet, and i just watched the sun.

When we got to the bus terminal in Boston we had missed our connecting bus by ten minutes. We couldn’t be late, we’d come all this way. We scrambled around calling other friends who had gotten there the night before. Tried to find room in a random car to Franklin. No luck. We ran over to the rent-a-car booth and bullshitted a story about being with disney corporate. They knocked our rate from $100, to $48. While walking to the car lot we get a call from Lyssa, who’s found us a ride. A friend i’d never met before, Brian (craig’s college roomate), picks us up ten minutes later. It was a 45 minute drive. Brian told us about Boston and Plymouth Rock and how it was just make believe and how christopher columbus was an asshole.

You know it takes so long for it to really hit you. When you walk in and see him, you feel so empty…you meet alone and loneliness when you see death. After I found out i wasn’t really affected, it was just like “insert sadness here”, it wasn’t really tears…just shock. But here he is now. My friend, at his final resting place, in Franklin, Massachusetts. When you get older you don’t really think about your relationships with people the same, It’s not like “good friend”, “best friend”, “bestest best friend”, “schoolfriend”, it’s just kind of this even plane of friendship, for me at least. The best friends are the ones that you see the most, or at least that’s how i’ve come to view it.

I saw Craig the night of his death, I guess roughly 4 hours beforehand. Now that i think about it, it feels like i was talking to a ghost. He seemed ready to me i guess. Probably more ready then I’ll be. I think my roomate Brett Land put it best, “when someone who’s young enough to fully appreciate the ‘teenage mutant ninja turtles’ dies, it’s fucked up man.” They buried him with his michaelangelo hat in the casket, my favorite turtle as well. A couple days earlier he was showing me photos of his sister and telling me to call mine…who i only spoke to at christmas. He showed me his room, that he had just cleaned for the first time in 2 years. He jumped on his bed excited about going out that night, asking my opinion on what button down shirts made him look fat. Maggie Lee hugged his neck and told him, “be careful riding your bicycle craig”, he told her she didn’t have to worry. Which I think is true.

I worry less about him and more about his friends being without him. I didn’t know i was going to speak at the funeral till i was up at the podium. My heart felt like it was tryin to escape my chest. I dont know, i just wanted to tell everyone the story of his last time at home, i wanted people to know about how happy he was, i wanted to make Lyssa smile remembering the last time they laughed together. The preacher said it was the largest turnout for a funeral that he’d ever seen…which is “pretty great” i thought, but now that i think about it…it’s pretty fucking not great too. r.i.p. craig. 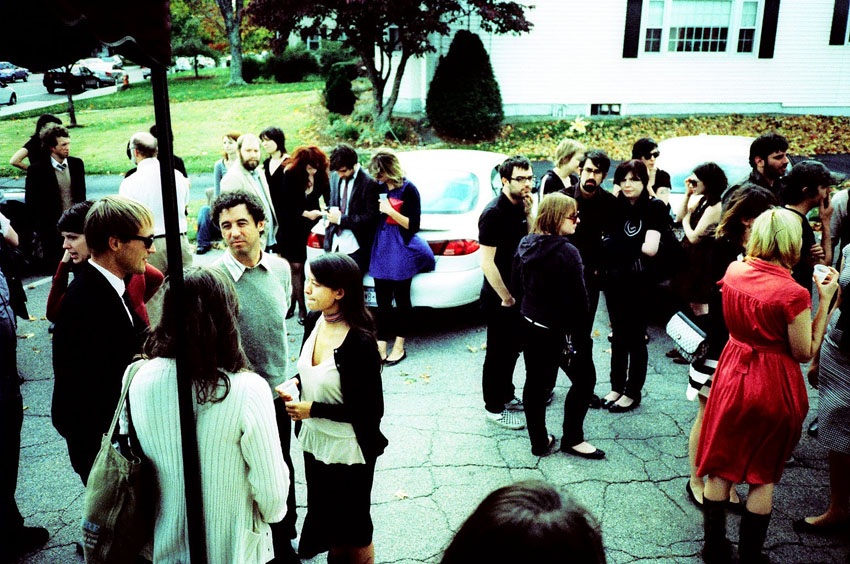 havent been getting out much, these are older.

there’s nothin more soothin than rakin leaves. gently watchin them tumble over each other back and forth. getting all stuck in the prongs of the rake, feeling them crunch under your feet. usually its chilly out, brisk. the seasons are changing.

i raked the yard after garcia (my grandfather) died. we all gathered around him in alabama for 5 days before he passed. just talking to him, telling him everything was alright, letting him know we were there. he couldnt speak. he probably just felt embarrassed, he didnt like attention.

he had collapsed 10 days earlier, the culprit being a stroke. his 2nd we’d just found out, months earlier he had suffered a much less intense one that even garcia himself wouldnt have been able to notice. and then he just layed there, wide eyed, looking around the room…staring straight into you, but what felt like through you as well.

anyone who dies in a hospital like that just drowns. you just sit there till you cant breathe anymore, choking and drowning feel all the same to you at that point i think.

the worst part of the week was the hope. when my dad called and told me that i had to come to alabama i knew by his voice that he was sure…sure that i would be around for the funeral. but after i arrived we would get these daily updates from the doctor on garcia’s improvement, “is he gonna come out of it?”, “live more?” i asked? noone knew…well maybe they did.

early one morning at 4:30 we got a call from my aunt mary…grandad’s condition had worsened. we walked into the hospital room to a hysterical mary, “i didnt know what to do! I was all alone! I thought i was gonna be the only one here! mother, mother!”, she cried.

grandmother turned on the praise and worship music. we all held hands around him and stood quietly…grandmother kept repeating, “garcia it’s alright. i will be fine honey. it’s gonna be okay, its okay garcia. i love you, i will see you soon in heaven. we’re all here garcia.” we watched the sun rise.

grandmother never cried. she was the strongest out of everyone. i balled with my father, the warrior, in the hallway of the hospital. he came to console me, he held me like his child and we wept, the warrior and i.

later that day we returned home. to the house garcia built. i noticed 6 cars all crammed in the driveway. if family was visiting garcia’s house….that yard was spick n span. so i raked his leaves. i made the yard look good. i did yard work for 4 hours straight. i put everything i had into it. and i was called in for supper with bleeding hands that i hid under the table.