my russian slice of life (color)

I spent about three weeks this winter in Moscow visiting family. I also hung out with my friend Daria and a handful of young Russian activists ranging from the Food Not Bombs to Anti-fascist movements. This trip, compared to others I’ve taken in my homeland, was the most intense and touched me the most closely. It was a real pleasure to meet with such a wide variety of people. Check out my friend Lubava’s website for transcripts of interviews and pictures (especially if you can read Russian!).

My father’s father, Yuri Mihailovich, and the estimable Barsik.

My father’s mother, Lutsia Antonovna, whom my grandfather wooed from Latvia. She is a great cook.

He worked at the steel plant for many years, wrote several books of memoirs and poetry, and is still standing after 3 heart attacks.

Eating homemade salted fish and drinking beer at my mother’s parents. First time I’ve seen them since I was five.

They’ve been canoeing each summer on the wild Volga for over thirty years, and are both very able with their hands. Still in love.

One year later, traveling with my mother once again.

My father. He has too many great stories to tell that I can’t write here.

Father and wives, past and present.

A friend’s apartment had interesting decoration.

Went drinking with my cousin’s friends one night.

They’re an ecclectic and musical bunch.

Every metro station in Moscow is completely different in design.

My cousin Nikita, who is in a metal band called Made in China, took Daria and I to a show.

Daria… I’m so glad she was with me to discuss and process everything we were seeing.

We spent many hours talking to activists from Moscow and other Russian cities. 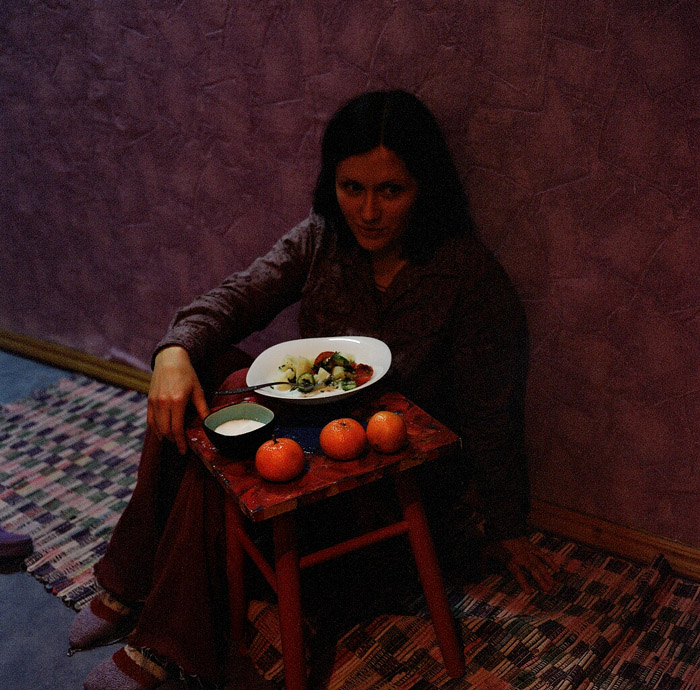 Our main contact was Lubava (what a generous, rebellious soul! and vegan to boot), the organizer of most FNB actions in Moscow. Through her we met many people, even from different cities, and got to share our experiences as young activists. What we found was both jarring and inspiring… the level of violence and oppression in daily life is not something sheltered college kids in Berkeley ever really see.
We wrote an article that’s going to be published in the upcoming Slingshot mag.

The outskirts of the city.

The night before we left it was my grandmother Galya’s 70th birthday. She made just about everything laid out on the 12-foot long dinner table.

It was great to end the trip with music, laughter, food, and the love of family.